Megan Vaughan on Deborah Pearson's It's All Made Up

Blogger Megan Vaughan is currently visiting rehearsals for each of the five Site shows, chatting to the writers and companies as they work, and running her fingers over the walls when no-one’s looking. In this, her second post, she reflects on the central image of the goldfish in Deborah Pearson’s It’s All Made Up, and discovers what it means to give birth when you live underwater. 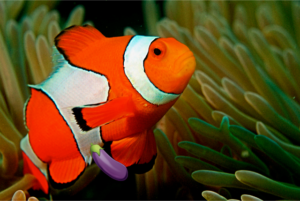 There are three goldfish in It’s All Made Up by Deborah Pearson. For now, they are played by a jug, a vase and a bowl. They’re like mediators for the other characters; this is a chance to be the fish they always wanted to be. ‘How is your goldfish feeling right now?’ ‘What would your goldfish like to say to my goldfish?’

Turns out my goldfish is thinking about sex. Obviously.

Even when it’s really just a vase – a stand-in for the real thing – I can’t stop thinking about fish sex. How it works, what bit goes where. It’s seriously fascinating. I might give this theatre stuff up altogether; become a marine biologist.

Did you know, right, that some deep sea loner fish (known as Ceratiidae) reproduce by literally melding to one another? It’s called sexual parasitism, which I realise will be familiar to any ladies who used to go out to 5th Avenue in Manchester on a Thursday night circa 2003, but for the rest of you… when a female fish meets a male fish, way down at the bottom of the ocean floor, in the pitch black, the male fish bites onto her, and – get this – literally fuses his face to her body. For real, there are enzymes that melt them together, into one single fishy being with blood vessels reconfiguring and everything. That way, when the female is ready to spawn, she just shoots her eggs and the dude is right there, boner a-waggling. But that’s not all: biologists reckon that one femmefish can have up to eight blokefish hanging off her at any one time. (Know the feeling, amirite ladies…)

Then there’s this other one called the Amazon Molly, or Poecilia formosa. Somewhat brilliantly, THERE ARE NO MALE AMAZON MOLLIES. Not one. Mollies birth clones of themselves, like radical feminist robofish. They have everything they need within their egg cells to just make baby fish happen when they want to. Y’know, like when they feel ready and have got where they want to with their careers and travelled a bit, etc. Wikipedia says that these Amazon Mollies do still need “the presence of sperm” to turn them on enough to kickstart the whole clone baby operation but I expect that’s just the science patriarchy talking.

Here’s another one. Clown fish are what’s called sequential hermaphrodites. That means they’re are all born male, and then they turn into women once they get big enough to handle it. (I have a theory that it’s also connected to wit and intelligence but that’s for another blog post.) Just like in Finding Nemo, clown fish are monogamous, and live together in their anemone until one of them dies. But – here’s the thing – if the female fish dies first, a teenage boy fish will just take it upon himself to move in, causing the grieving widower fish to transition to female almost overnight. Ovaries, higher IQ, multi-tasking, the lot. A new power couple on the reef.

I could go on all day (Claspers! Penis fins! Bullhead shark eggs!) but I won’t, because there is also some theatre to think about. And, in the interests of transparency, I should let you all know that Deborah Pearson hasn’t written a play about a bunch of carp getting all Fifty Shades in the reed beds. But there are fish, played today by the jug, the vase, and the bowl. You see, within the environment of The Site – a birthing pool, a breeding ground – there are adaptations, evolutions, metamorphoses. I guess a rehearsal process is a spawning of sorts.

Having babies underwater is as mad as the fucking. There are some kinds of fish that just spray their eggs all over the sea, indiscriminately. They will have no contact with their offspring at all. Others, like salmon, will travel hundreds of treacherous miles to ensure their young are born in the safest, gentlest environments possible. Others give birth to gazillions of live fishy babies, who live off internal nutrients from the egg sacks – kinda like sitting in yolk, or a massive blobby placenta. This is how I like to think of The Site’s relationship to It’s All Made Up: a fleshy ideas-womb, where characters and interactions develop gradually, first in Deborah’s head, and then in the mouths and actions of a developing family. It’s completely different to last week, where Stacey Gregg had created improvisation prompts for the Lights Out performers. That was more like observing a shoal of fish moving together, with hidden, intuitive markers alerting one another to the direction of food, or safety, or danger. In the life cycle of It’s All Made Up, there is danger everywhere. It is inevitable. It is to be embraced. Life is hard. Survival is not guaranteed. There are no instructions, other than to swim upstream, dodge the bears, and speak aloud, even when our truths are long and complicated and emotionally fraught.

When salmon finally make it up river and release their eggs, they die. They’re knackered for a start, but also, they’re done. The cycle is complete. Theatremakers will no doubt tell you that the day after a press night party feels much the same. But then it’s through the work that writers and artists perpetuate themselves. Theatres and galleries and libraries are just massive public gene pools. Insemination labs for a new future. Yolk sacks for stories.

And motherhood? Motherhood, like playwriting, is just creating the conditions for survival. 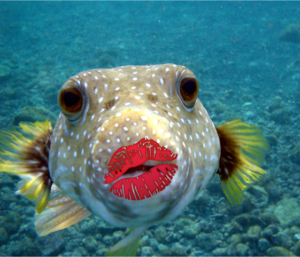