Stories from Donbas: Bad Roads and Modern Poetry in Translation

Bad Roads is a new play by leading Ukrainian playwright Natal’ya Vorozhbit, translated by Sasha Dugdale. The writer-translator duo have been working with the Royal Court since 2004, as a part of our ongoing project with Russian language writers. Their work includes The Khomenko Family Chronicles in 2007, The Grain Store (with Royal Shakespeare Company) in 2009, and Maidan: Voices from the Uprising in 2014.

When the conflict between Ukraine and Russia escalated in 2014, Natal’ya started travelling to Donbas to speak to people affected by the military conflict. Bad Roads was created based on the powerful and heart-breaking stories she heard from both sides of the divide.

The latest issue of Modern Poetry in Translation, a literary magazine edited by Sasha Dugdale, also offers perspectives on the war in Donbas through newly translated work by Ukrainian and Russian poets.

Here’s an exclusive preview of the autumn 2017 issue, including an introduction by Sasha Dugdale and an excerpt of the epic poem ‘War of the Beasts and the Animals’ by Maria Stepanova. 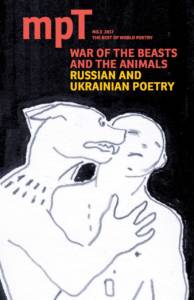 This, my last, issue of MPT features poems of conflict and protest from Russia and Ukraine. The conflict in the Donbas region of Ukraine is politically intricate, and at the same time it is diabolically simple. In 2014 Russia covertly invaded an area of Ukraine with an ethnically and linguistically Russian population after illegally annexing the Crimea. A fierce war broke out, with daily casualties and atrocities, and even now it smoulders on in the area. Propaganda and false truths draw a veil over the war and its many casualties and victims, and serve at the same time to heap grievance upon grievance; to ensure that peace will remain provisional and uneasy.

A generation of Ukrainian poets has risen to the challenge with war poems of exceptional honesty, integrity and courage. If you want to know what it feels like to live through a European twenty-first century war then you should start by reading this poetry, just as you might well start with the poetry of the First World War. Poetry in war has a heightened significance because, as Ilya Kaminsky writes, it ‘like a seismograph, registers the violating occurences’ that everyday forms of language are no longer able to measure. Poetry continues to insist on the seismic tremors of Keats’s ‘felt truth’. Awkward, uncomfortable and deeply individual, ‘felt truth’ resists the monolith of propaganda and the easy generalisations of foreign policy and journalism. It also resists the glamour of sacrifice and the glibness of despair. As Serhiy Zhadan writes of a war victim: ‘There will come a time when some bastard will surely write heroic poems about this. | There will come a time when some other bastard will say this isn’t worth writing about.’

It’s worth noting here that the number of Ukrainian poets includes some Russian speaking poets, as Ukraine is linguistically divided and many of her citizens have two mother tongues. The front line is along ethnic and linguistic lines of difference; however many Ukrainians will say that until the protests in Kiev in 2013 the differences between East and West were at the level of jokes about ethnic stereotypes. The poetry by Russian authors here is equally unsettling because it lays bare a fractured and troubled post-Soviet landscape and a poetics which is born of anxiety and loneliness.

I have translated and included here Maria Stepanova’s poem ‘War of the Beasts and the Animals’, because it is a direct commentary on the war in Ukraine: ‘a civil war’ as Stepanova has said, ‘in the sense that all wars are civil wars’, although of course it is also a civil war in the sense that both sides have a common tongue and a common Soviet and imperial history.

Stepanova explodes the martial culture and jingoism of post-Soviet Russia into a million constituent splinters and shows the complicity of culture in violence. Culture is simply the lubrication needed to insert a people into a new war: the erosion of real memory by mythmaking, the destruction of real humans in the fabrication of heroes. ‘War of the Beasts and Animals’ is a new modernist poem, political, angry and lyrical.

The poetry from this region has never been more necessary to us. It provides us with a true insight into modern war and its psychological effects, measured with the finest instruments: lyric poets. With its truth-saying powers it also alerts us to the danger of imperial reach and the glorification of nationalism and military might. There is much that prophetic Russian poets can tell us about our own future.

War of the Beasts and the Animals – Excerpt
Maria Stepanova, translated by Sasha Dugdale

Look, the spirits have gathered at your bedside
Speaking in Lethean tongues
Hush-a-bye, so flesh and fine,
For what do you long?

I smiled
He said, Marusya,
Marusya, hold on tight. And down
We went

No vember
the cruellest month, the hoarsest mouth
driving from the dead clay
peasants forged to the field,
cows, curs, leaving over their dead body
the postbag snagged in the stream

The Greek in Odessa, the Jew in Warsaw
The callow young cavalryman
The Soviet schoolboy
Gastello the pilot
And all those who died in this land
out of the murky pool, the surface still warmed by the sun
in a night in may, steps rus al ka and quickly begins her work
throws her wet clothes from her tramples with her wet feet
her black body shines her white smock cast

mother, mother is that you? alyosha I don’t rightly know

o swallow, swallow, is it her? she flew away, my friend

Modern Poetry in Translation is a literary magazine founded by Ted Hughes and Daniel Weissbort in 1965. It publishes the best international poetry in English language translation, from Nobel winners to exciting new voices, plus essays and reviews of new publications. Recent issues include commissions of poetry by refugees, a focus on Korean poetry, and new work translated from the many languages of India.

Find out more about Bad Roads by Natal’ya Vorozhbit, translated by Sasha Dugdale