‘100 Years’ aimed to explore the changes for women throughout history. Before we could talk about women’s rights, we needed to acknowledge the intersectional nature of oppression. Yes, we’re celebrating 100 years since the first women were given the right to vote, but this right was only given to some. When discussing these issues, it is important to have an awareness of your own privilege and to be an advocate for all, not just for yourself.

All women can now: become lawyers, become accountants, serve on a Jury, sit in the House of Lords, obtain a court order against their husband and be considered a ‘person’ in the eyes of the law. These are just a few of the progressions made in women’s rights since 1918, some of which seem prehistoric to me. We talked about the huge leaps that have been made and moved on to discuss what the next 100 years might look like.

We proposed this provocation in a series of workshops. We presented a Key Stage Three class from an all-girls school, a group of retired people and two public, female-only workshops with the following questions: 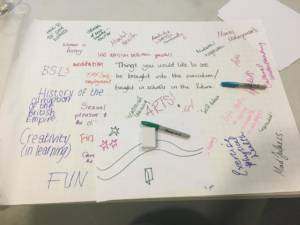 Between them, the groups gave hundreds of suggestions including: 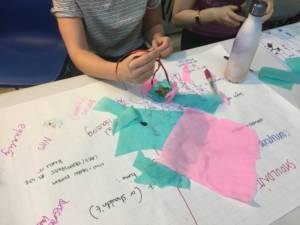 Everyone then had the opportunity to design their ideas of what they envisioned a ‘perfect’ world would look like, creating manifestos and matchbox versions. These became the settings for new and exciting stories and we began to write about what they would feel, smell, look, sound and taste like. We fed back as a group and got to hear about all the brilliant ways different people would rule the world. 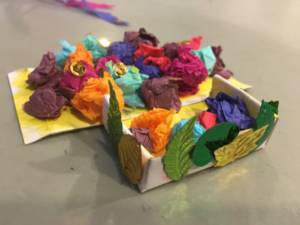 A big thank you to all of the women that shared and listened with us. I felt empowered by the open discussions and inspired by the creativity in the room.

The Take Up Space series continues through the year with different events and workshops. Next up is ‘Women Offstage’, a workshop showcasing offstage roles for women looking to start a career in theatre, on Saturday 26 May, 10am – 12.30pm, facilitated by members of our Production Department.

We ended our ‘100 Years’ workshops by sharing either piece of advice, a book/film/TV show/play recommendation or a joke with someone in the group, so it only feels right that I end this blog post in the same way:

Why did the golfer wear two pairs of trouser? In case they got a hole in one.