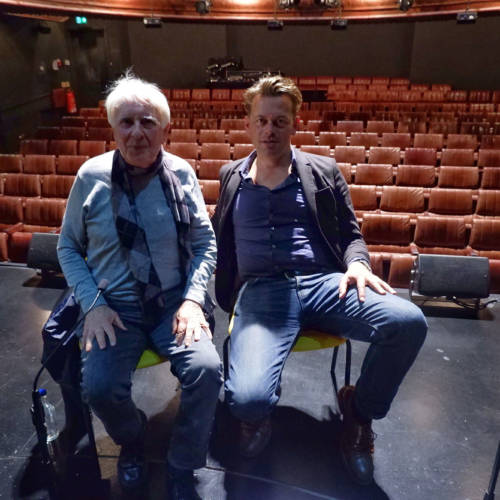 “There are a handful of figures in the history of the Royal Court Theatre that define the place. They carved the path that, whether they are aware of it or not every artist that has worked here after them is attempting to travel down. One of that handful is the Welsh actor, director and playwright Peter Gill.

Born in Cardiff in 1939, Gill came to London in his late teens and got work here at the Royal Court as an assistant director. He worked with those figures who established the theatre in its first decade. He worked with George Devine, Lindsey Anderson and Tony Richardson. He worked as a stage assistant with a Anthony Hopkins on the touring production of Look Back In Anger. He auditioned for Ann Jellicoe. He established his name as a director at the Court towards the end of the sixties when his seminal productions of DH Lawrence’s trilogy of plays established Lawrence as firmly as a dramatist as he was known as a novelist and prose writer.

Gill’s first plays were written in the same decade. They are amongst my favourite plays in post war British theatre. The formal inventiveness, compassion, honesty and linguistic poise of Small Change, Kick for Touch, Cardiff East and The York Realist slay me quite completely. I once earned what I can only describe as a hard stare from Guardian theatre critic Michael Billington when I told him that I considered Gill’s debut play The Sleepers Den to be as striking as its contemporaries, Edward Bond’s Saved and Harold Pinter’s The Homecoming.

Gill established the Riverside Studios in Hammersmith in 1976. He made the place one of the cornerstones of exploration and energy in London’s theatrical culture. His many landmark productions as director there included the still celebrated startling opening production of his own version of Chekhov’s The Cherry Orchard and, at the start of the 80s he moved to become an Associate at the National Theatre where, in 1984, he established the National Theatre studio. The Studio became and remains a hothouse of exploration and invention for the leading theatre artists of its time. There are few if any buildings or institutions more fundamental to the last forty years of British theatre.

He has directed nearly a hundred productions across the UK and North American and continental Europe. He has directed Shakespeare and Sophocles, Turgenev, Pinter and Sam Shepherd.

It strikes me as a coincidence of the happiest possible order that, due to a variety of administrative problems we are unable to record this conversation in the usual confines of the sound studio on the theatre’s fifth floor. And so we find ourselves instead in a makeshift space here on the stage of the Royal Court Theatre Downstairs. There can be no more appropriate writer to christen this stage as a conversation space for these podcasts and no more appropriate place to record a conversation with a man whose soul runs so deep in this theatre.”