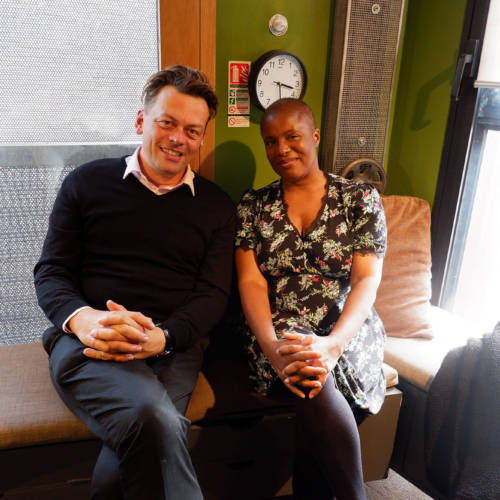 “One of the pleasures of making these podcasts is exploring the work of those writers I am talking to. It is an embarrassing confession that until this month I was entirely ignorant of the plays of Winsome Pinnock. I understood her to be a figure of real significance in British playwriting over the last three decades but it happened that she was a writer that I hadn’t read.

Reading her plays has been little short of a revelation.

She is a writer with London deep in her veins. Born and educated in Islington she attended that borough’s celebrated Anna Scher Theatre School before studying English and Drama at Goldsmiths and taking an MA in Modern Literature at Birkbeck. She has said that she found a greater sense of self here at the Royal Court Young Peoples’ Theatre in the early 80s where she was taught by Hanif Kureishi amongst others. And, at the same time as having work supported by the Half Moon Theatre and the Women’s Playhouse Trust, it was while part of the Young Writers Theatre that she wrote her first full length play Leave Taking.

A scalding, tender study of a family in the emotional throes of the displacement and self-interrogation that immigration into London from the Caribbean has brought them, it was staged at the Liverpool Playhouse Studio and in 1988 at the National Theatre, making her the first black female playwright to have a play staged there, some twenty years after its opening. To date there have been only five others.

Her plays for the Royal Court include  A Hero’s Welcome with the Women’s Playhouse Trust and A Rock in Water with the Young People’s Theatre and 1991’s extraordinary Talking in Tongues. Talking In Tongues felt like a real discovery to me when I read it earlier this week. A play of formal daring and emotional honesty it charts the same existential diaspora of immigration as Leave Taking. A frank and often hilarious study of the emotional and sexual complexities of the black British assimilation into white London life in the first act it takes us, in its second act to the beaches of the Caribbean and exposes those same characters to the scorch of heat and the ferocity of a ruthless Capitalism as that cultural assimilation is reversed and we watch the cruelty and ignorance, pathos and perversions of the English abroad.

Talking In Tongues was followed in 1996 by Mules a play written for the seminal Clean Break theatre company, a company that establishes residencies in prisons for female playwrights and then commission those playwrights to write plays in response to their experiences. Mules is linguistically rangey, sharply observed and unflinching in its study of a globalised drug trafficking culture.

She has written for the Soho Theatre and the Tricycle; she has taught at Royal Holloway College; and Cambridge and Kingston Universities. If she has had a comparatively quiet decade on our stages in the past ten years she has continued to write with energy for radio and with this year’s revival of Leave Taking at The Bush there seems to be a renaissance of interest in her work.

The debt that recent years of black British playwrights owes to Pinnock has been celebrated and is unarguable. She was described by the Guardian as the Godmother of Black British Theatre. But I can’t help feeling that, while upholding and championing her cultural presence as a figure of enormous importance in the recent dramatising of Black experience in the country, it would be a mistake not to also celebrate her for her glorious formal audacity, the unapologetic articulacy of her world and the rigour and clarity with which she has dramatised the existential catastrophes brought about by capital and gender inequality as much as by the innate racism of the legacy of British colonialism.

I loved reading her plays for many reasons but what lingers with me most is the air and space which she allows her characters to speak and to listen to one another. At a time when other writers were refining the attack of rattling dialogue, Pinnock opened up the space for conversation and idea and while dramatising with incision and complexity those cultural structures that have restricted or damaged her characters she was, in her plays, able to give them a space to talk to one another, fully, fearlessly and with great compassion.”