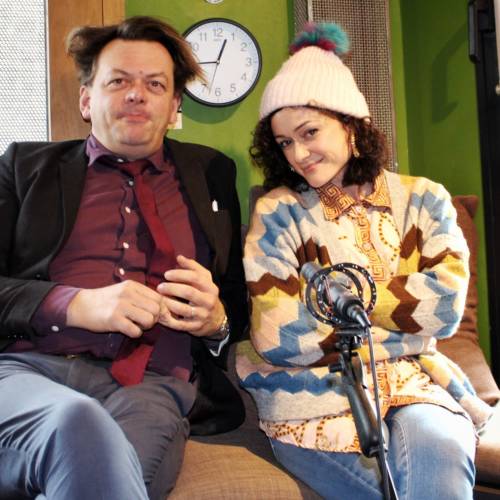 I first met the playwright, poet, performer, presenter, screenwriter, anthologist and librettist Sabrina Mahfouz in the Houses of Parliament. In 2015 we had been invited by the theatre company Paines Plough to talk about the political nature of and political representation in British playwriting. It was a remarkable night which lingers in my head predominantly for that meeting and a rather daunting oil painting of former Tory Party Home Secretary Michael Howard. Four and a half years later I was thrilled by the energy and intelligence of her Royal Court debut show the gender obliterating dramatic lecture A History of Water in the Middle East. I have seen few shows in the past twelve months that more trippingly illustrated the political potential we were talking about on that odd night.

The show marked her final production of a decade of quite extraordinary creative energy. She has written and produced up to twenty plays in the last ten years, it is genuinely hard to keep count. Her first play 2011’s Dry Ice was directed by David Schwimmer at the Underbelly Edinburgh before moving to the Bush Theatre.  Her 2013 play Clean won the Herald Angel Award when it played at the Traverse Edinburgh before moving off-Broadway. The following year’s  Chef was short listed for the Carol Tambor Award after being staged in the Brighton Fringe and at the Soho Theatre. Paines Plough produced the Stef O’Driscoll directed With a Little Bit of Luck at a sell out run at the Camden Roundhouse. Quite uniquely amongst all the writers I’ve spoken to in these conversations she has had a play performed at Wembley Stadium, her history of women’s football co-written with Hollie McNish, Offside. She has written for NT Connections, adapted Malorie Blackman’s celebrated Noughts and Crosses for Pilot Theatre and was one of the writers on the Wende Song Project her at the Court this year.

She has compiled anthologies of British Muslim Women’s writing, 2017’s The Things I Would Tell You and considerations of working class identity Smashing It published this autumn 2019. She wrote beautifully in Nikesh Shukla’s collection The Good Immigrant. She has published a novel as well as several celebrated collections of poetry; originated television; written a libretto for the Royal Opera House and worked and written about her working life in Mayfair Strip Clubs and the Ministry of Defence alike.

Her failed attempt to get Top Secret Security clearance while working at the MOD runs like a spine through A History of Water in the Middle East. From this spine she reaches outward to interrogate her own identities as a South London born Muslim woman of Egyptian heritage as well as lacerate the culpability of the British Government in the last hundred and fifty years of political turmoil, economic instability and bloodshed in the part of the world that her family came from.

It was a remarkable show. Defined by a pulsing musical score by Kareem Samara with operatic counterpoint by Laura Hanna it managed to both explore and explain British Imperialism and Mahfouz’s place within it. Mahfouz is a compelling performer, passionate and witty and savage and self-deprecating by turn. Her performance and her show seemed emblematic of an energy that has driven one of the most dizzyingly prolific and formally surprising careers in contemporary British Theatre.