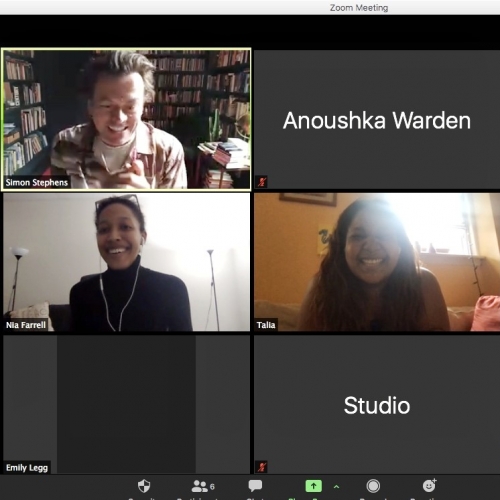 This conversation has been transcribed and can be accessed here: https://royalcourttheatre.com/podcasts/playwrights-podcast-transcript-of-series-5-episode-5-ta-nia-aka-talia-paulette-oliveras-nia-farrell-talk-to-simon-stephens/

You can watch a livestreamed performance of Ta-Nia’s (aka Talia Paulette Oliveras & Nia Farrell) Dreams in Blk Major here: https://digital.berlinerfestspiele.de/stueckemarkt/dreams-in-blk-major
All readings/recordings will be available for 24 hours for the 18 May.

The presence of academia in theatre making in the United States has a status that is, I think, more pronounced or established than it seems to me to be in the UK or elsewhere in Europe. In many US cities the theatre is housed within the university. The artists and audience are often academics or students. In New York, that complex heart of the country’s theatrical history, Columbia and NYU in particular provide the art form with a constant pulse of new life. Theatre in the US seems born out of a synthesis between the theoretical rigour and interrogations of its universities counterpointed with the energy and drive of the marketplace, as most famously typified in the theatre houses of Broadway.

The theatre making duo made up of director Talia Paulette Oliveras and writer Nia Farrell, collectively known as TaNia, both typify this position and obliterate every last archetype it might suggest. They met while studying experimental and collaborative theatre making at New York University’s Tisch School of the Arts. The power of their theoretical rigour and the incision of their thought as a means of critiquing power was maybe developed at NYU, but there is no arid or academic crust to the work that TaNia first developed there: the visceral, playful, humane, angry, Afrofuturist theatre event Dreams in Blk Major. First staged at Tisch in 2019 it transferred to the National Black Theatre in Harlem in the same year, and then the ANT Fest, the all new talent festival at the celebrated Ars Nova Theatre. In 2020/21 it was chosen by jurors to visit the Stückemarkt at the Theatertreffen.

It is a source of some regret to me to not be able to make it to Berlin to see any of the five shows chosen for the Stückemarkt in real life. But I can’t help feeling that it is a particular shame to not be in the same room as Dreams in Blk Major as it is played out there. Farrell’s text is sensuous and poetic. It explodes the conventions of linear narrative to create a text that is built on ritual more than it is on a dramatic arc. It describes itself as a celebration in five movements. Reading the text on the page, the energy of that celebration alone is infectious. Infused by the magic and dignity of music and art, it combines jazz and cookery, reinvents a school curriculum with unapologetic glory, reimagines BuzzFeed questionnaires and makes a theatrical intervention that encourages the audience to engage in a consideration of their own identities and incumbent histories. It draws from a past of centuries and imagines a new future, but invites a ritual that is necessarily defined by its present tenseness, asking its actors to really talk and really listen to one another, inviting its audience to really dance and the food that ends the piece to really be made, and to taste – I imagine – fucking fantastic! If this is a piece born out of a nuanced and complex theoretical understanding, it is also one of the most joyous and celebratory pieces of theatre I have imagined all year.