The Royal Court Theatre will present For Black Boys Who Have Considered Suicide When The Hue Gets Too Heavy by Ryan Calais Cameron in association with New Diorama Theatre and Nouveau Riche in the Jerwood Theatre Downstairs from Thursday 31 March 2022, with press night on Thursday 7 April 2022, 7pm.

Ryan Calais Cameron is the director and Tristan Fynn-Aiduenu is the co-director/original director. They will be directing the original cast who include;  Mark Akintimehin, Emmanuel Akwafo, Nnabiko Ejimofor, Darragh Hand, Aruna Jalloh and Kaine Lawrence.

The play was originally conceived by Ryan Calais Cameron in the wake of the killing of Trayvon Martin in 2013. Rich with honesty and insight, the show was developed over several years, with further support from co-commissioner Boundless Theatre, including workshops with young black men and mental health groups. Over 100 men auditioned for the production in 2021, and after a four-week rehearsal period in Nouveau Riche’s studio at NDT Broadgate, the production, originally directed by Tristan Fynn-Aiduenu, saw a sell-out run at New Diorama Theatre in October – November 2021, with returns queues at the theatre every night.

For Black Boys Who Have Considered Suicide When The Hue Gets Too Heavy was one of the first shows to be made at New Diorama Theatre’s revolutionary Post-Lockdown artist recovery hub NDT Broadgate, where Nouveau Riche are an Associate Company. Launched in 2021, NDT Broadgate is a brand new 20,000 square foot rehearsal and development complex offered entirely free as a radical gesture to support independent artists get back on their feet. To date the project has gifted over 50,000 hours of free space to more than 180 groups and companies.

“I found a king in me and now I love you

I found a king in you and now I love me”

For Black Boys Who Have Considered Suicide When The Hue Gets Too Heavy, inspired by Ntozake Shange’s seminal work For Colored Girls Who Have Considered Suicide / When the Rainbow Is Enuf, is located on the threshold of joyful fantasy and brutal reality: a world of music, movement, storytelling and verse – where six men clash and connect in a desperate bid for survival.

For more information and to book tickets, visit the show page. 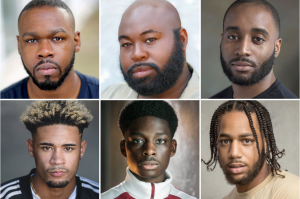