In Conversation with Hester Chillingworth

Hester Chillingworth (pronouns: they/them) creates work which is playful and interventionist; work that elevates the everyday, while remaining accessible. Often playing with language, simplicity, interpretation and mischief, their practice sits at a crossroads of live art and theatre. Hester is a Royal Court Jerwood New Playwright 2020 and previously co-curated our new writing event, Queer Upstairs.

From 8 May to 15 Oct 2020, Hester’s durational installation Caretaker was live-streamed from the Jerwood Theatre Downstairs. 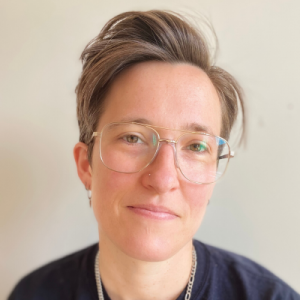 Why did you create Caretaker?

I created Caretaker because for a while now I’ve been interested in what happens when you remove or obscure the human from performance. How does our viewing process change when there are no visible bodies to project onto? What ‘personality’ or qualities do different spaces and occasions have in themselves, before they are peopled or filled with all the content that we cannot help but bring along with our bodies. Can an absence of bodies allow for a particularly wide, accessible, inclusive watching experience, where the emptiness can be filled by whatever we bring to it? How can the problem of the limitations of the human body, or how it has been labelled and classified in order to distribute power unevenly, be represented and played with in performance without risking reinscribing those very same problems? These are all questions that I’ve been chewing over for a long time. When we entered lockdown and theatres closed their doors, I realised that that was exactly the time to try to discover if a performance without bodies in could have a life. Not only were the circumstances exactly right in a way they wouldn’t have ever really have been if theatre was running as usual, but there was a need, a desire, a yearning for the voice of theatre not to fall silent. It felt very important to keep a space ‘open’ and connected to the public, not to fill with a story, but to allow us all to process and sit with the difficulty and strangeness of our own story (collective and individual) of Covid-19.

Why was the Royal Court the place you wanted Caretaker to set up home?

In 2019, I co-curated Queer Upstairs, an evening of new queer writing, with Mark Ravenhill at the Royal Court. I wrote a piece of text for a computer generated voice for that event, which was a great test for some of these ideas. I am a 2020 Jerwood New Playwright at the Royal Court, and I’d already been talking a lot with Vicky and the creative team about my exploration of obscuring bodies in performance. The support and enthusiasm that I received really took me aback because I’d assumed that ‘mainstream’ theatres would find these kinds of questions too ‘weird’ or not relevant. I’m used to making work in a Live Art context, or framing my work as experimental theatre, so it was startling to be welcomed and encouraged by the Royal Court. I am constantly looking for ways to bring formally radical work to wide audiences – rather than only having it happen in hidden corners and underground studios – and so when lockdown hit I approached the team at the Royal Court about making a piece which expanded on the ideas and techniques I’d played with in Queer Upstairs, and which would make use of and honour the space of the Jerwood Theatre Downstairs. It felt like the logical place for Caretaker to be! It was the ideal intersection of a niche artistic exploration, and somewhere very well known, which a lot of people across the world have affection and respect for and so would serve well as a beacon of resilience for performance more widely.

This has been a strange period for everyone, in some ways lots has happened, in other ways life feels like life is on pause. How has the offering of, and words of, Caretaker been influenced by the times we’re living in?

I have written the text for Caretaker almost daily, so it has had the ability to be incredibly responsive to whatever is happening. At times this has meant I’ve written text which speaks very directly to world news, and at other times it has responded in a more subtle way to things which I am feeling, or to states I perceive a lot of people to be in or going through. I feel pretty sure that this has been (and will be for a while more) one of the most challenging times for global mental health, and I wanted Caretaker to be an offering which, while also hopefully being at times funny, fierce and simple, was also always urging us to practice self-care and to be gentle with each other.

Caretaker has been the longest running piece at the Royal Court, as an artist how has the journey been for you?

It’s amazing to me that it’s the longest running piece! That is definitely not something I had any idea would happen. As with most things at the start of lockdown, I imagined it might be about a month, so to still be running 6 months later is mind-blowing! I’m proud that the Royal Court’s longest running piece is this strange non-theatre theatre show. Caretaker has been a constant companion for me, sometimes bugging me when I want to get to sleep, sometimes buzzing around my head like a fly, but most often being a completely dependable and open friend which has had space and time for wherever I can meet it that day. And it’s meant I’ve felt connected to an unknown number of people who have dropped in at unknown times to spend some moments with us. It’s felt, I think, a bit like a heartbeat.

As Caretaker draws to a close, what do you hope it’s offered people?

I hope that Caretaker has offered a space of respite, contemplation and recharge. I wanted it to be a sort of secular sanctuary, not just for people from the theatre industry but from anywhere. I hope it has reassured people that the world is still there and that space and time are as rich a set of resources as the things we usually fill space and time with – that learning to be with ourselves is no bad thing. I hope it has activated people’s appetite for new ways of watching performance, and that it has been a place where people have always felt welcome and have often felt spoken to, with care.

An online audience gathered to watch Caretaker ‘open’ at 7.30pm on 8 May, we’ll gather again for Caretaker’s final words on 15 Oct at 5pm, why did you want to create a final moment and these collective moments?

I am writing a slightly longer text than usual for the end of Caretaker. Having been through these 6 months, and still being in a place of uncertainty, there are some things I would like the piece to reflect on and to offer out, going forward. So the last moment will be a micro piece of its own, rather than another short phrase we might blink and miss. Instead of an ending, this is the handing over of a baton, the end of a long shift, as life begins to stir in the Royal Court in preparation for Living Newspaper which is shortly to be occupying the building. I think in a time when isolation has been widespread, and we are almost always at a distance from each other, a moment when you can turn up, virtually, and know that others are doing the same (even if you can’t see them) is important. It’s a moment of community and of joint witness. And I think the thing that really pushes the vital questions of ethics, agency and accountability in live work, is realising that that’s what audiences truly are – witnesses.

Join us here for the final words of Caretaker on 15 Oct at 5pm.

Images of the Jerwood Theatre Downstairs by Helen Murray as part of her Our Empty Theatres series.